If you’ve been following me for any length of time, you’ll know I’m not happy with my current 3D printer, a Robo 3D R1+. When I first got it, it was probably the best value for the money, and was giving great prints. But, being the mechanical beasts that they are, that didn’t last.

I had many problems early due to my not having any experience. In particular, I had no idea about Z offsets and the effects it would have. Out of the box it worked fine, but I struggled with jams. The primary cause was the nozzle being too close to the bed, and as a result it kept scraping the glue I used to help prints stick to the bed resulting in not just a jam but a clog. I knew no one else with a 3D printer so I had no one to turn to for advice. The forums were good, but slow. I was working on a project at the time that needed to progress so the result was me walking away from the printer for months at a time.

Eventually I figured it out. Now I can deal with it in my sleep. Then the bed heater failed – upgrade number one. Then I got a vibration problem that I’ve never been able to fix. I’ve tried replacing rods, bearings, slowing down, and any tips and tricks I’ve come across. I just can’t reliably print anything with fine detail, or even the Launch Escape System tower that is part of my Saturn IB and Saturn V rockets. This is even more distressing knowing that I was able to print prototype versions perfectly when the printer was new, a feat I now find impossible to duplicate.

I’ve finally bit the bullet and started working on a replacement. Enter the Hypercube Evolution (HEVO):

As you can see, the current printer is still adequate for printing larger parts such as the ones used by the HEVO. So far, I have the print bed mostly finished, but there’s a lot of work yet to do. This is a CoreXY style printer. The parts are printed but I’m awaiting delivery of the non-printed parts. I haven’t started on the electronics yet.

My plan had been to wait until the new printer is ready before doing any significant updates to the older printer. Unfortunately this was not to be. My thermistor failed. Facing the need to replace this, I instead decided to do an upgrade I’d planned a while ago. I have a brand new V6 hot end assembled and ready to install. It does require some physical mods for the printer which is why I’d been holding off.

That is my weekend project. This may fix some other issues as well, as I know there’s an intermittent connection on the current hot end heat sink fan that wasn’t worth repairing. The printer will still be usable either way, and when I’m done with the new one my brother will be receiving a less than perfect but useful tool.

Organizing many video and audio sources can be a challenge, one that is solved by using a film slate. In this video I show how to make a simple slate with 3D printing and the materials I have on hand.

How to use a film slate:
https://www.studiobinder.com/blog/how-to-use-a-film-slate/

Rock a by Rocket – Rocket Cradles

A cradle is one of the most basic tools of rocket making. It allows you to lay the rocket horizontal while working, simplifying many tasks such as attaching fins. In this video I show a very versatile cradle design for both large and small rockets.

The Banshee is a fun rocket with whistles for fin pods! For a preview of the rocket and how it’s made, I’ve set a time lapse to music. Don’t forget to like and subscribe!

Creating nose cones in a CAD package can be challenging by hand, but easy when it’s done through software. In Part 1 of this 2 part series, I show you how to install an add in for Fusion 360 that does the work for you. Don’t forget to like and subscribe!

I’ve had a macro for FreeCAD for a couple of years that simplifies creating nose cones using parameters entered in a dialog. For many hobbyists, Fusion 360 is a more popular platform. Here then is a port of the program designed to run as an add-in to Fusion 360.

It’s easiest to explain installation and use in a video so check it out here:

Try it out and let me know how it works for you!

Released under the MIT license.

It’s been a busy time with the 3D printer. In addition to some heavy duty runs printing Saturn V parts, I’ve solved issues on 2 different fronts, resulting in not one but two different blog entries! Check them out here: https://www.davesrocketshop.com/?page_id=148

I’ve made no secret of my printers vibration problem. Subtle ghosting, not easy to track down. But I still want good detail prints, so drop the layer height to 0.1 mm at 10 mm/s.

At this speed, the extruder exhibits quantization. The plastic comes out in spurts and under extrudes. The bent string part in the image is the skirt and should be straight. Apparently you can print too slow! I increased the speed to 20 mm/s and the raft prints fine. 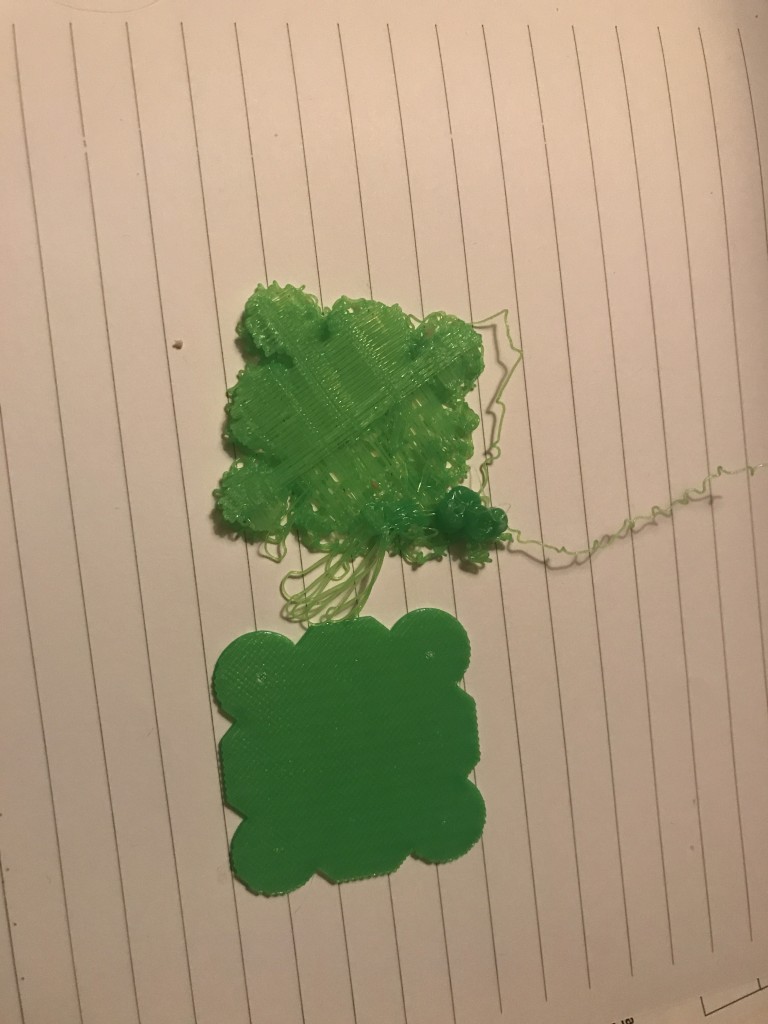 With that issue fixed I print my Saturn V LES tower. Ignore the colour. I’m using a plastic I have lots of for test prints.As I’m fond of saying, for every solution there is a problem, and in this case it’s a bad case of stringing! This is new! A string test confirms it’s probably something in my settings and not inherent in the model. 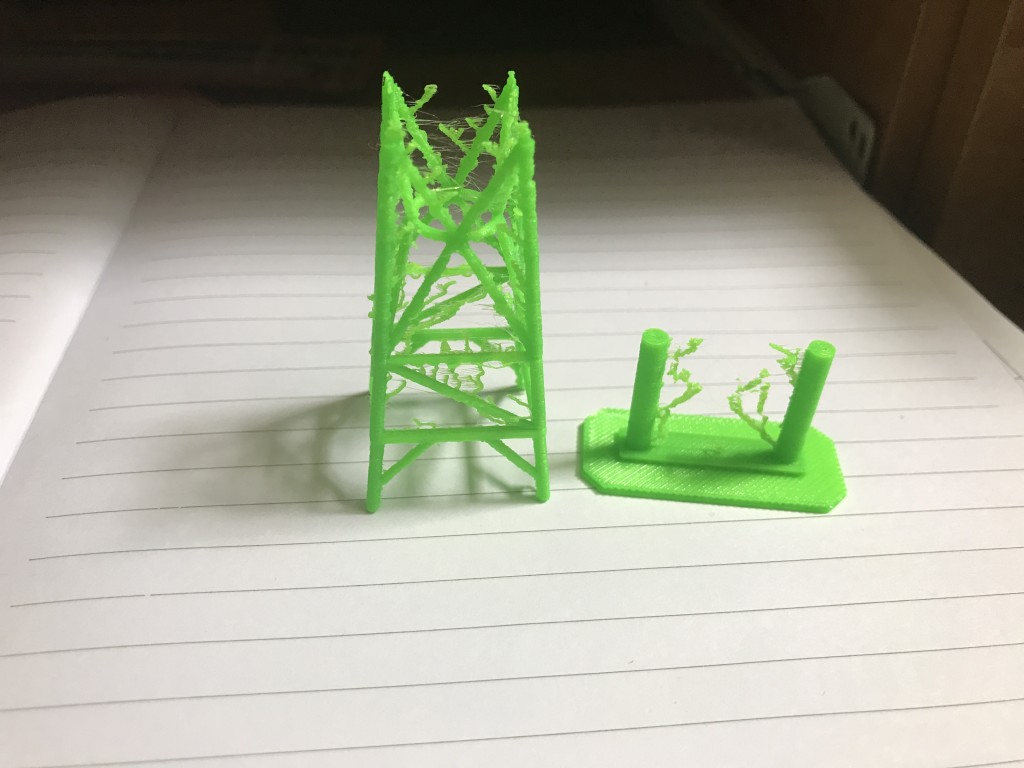 Stringing in the LES tower confirmed with a stringing test

There are many ways to fix stringing. One is to drop the print temperature. I dropped it from 210 down to 195, but with my extrusion heating issues I didn’t dare drop it any more. I increased extrusion distance to 2.5 with no noticeable impact. I increased the retraction speed from 30 to 50 mm/s with some improvement. Finally I retracted 3.5 mm at 80 mm/s. The final result is some small wisps but that’s okay. 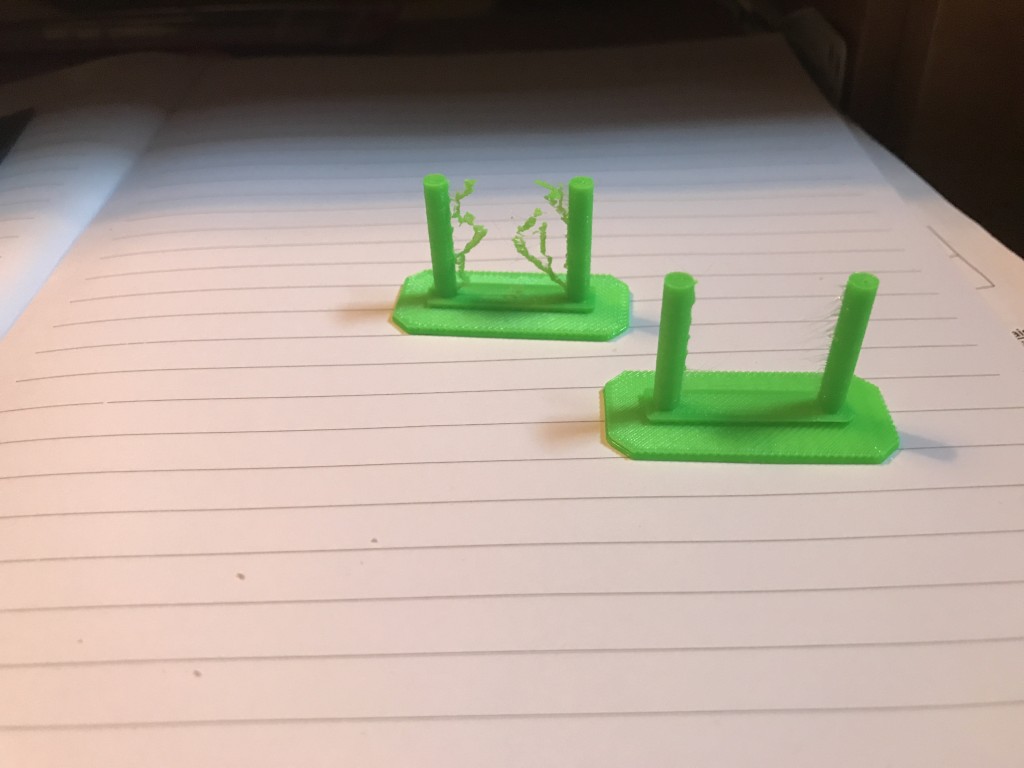 Stringing before and after adjustments

One variable I hadn’t addressed was the filament. This was a new brand for me, and although I’d done a couple of prints already, they weren’t models that would exhibit stringing. A test with my “standard” settings at 40 mm/s and 0.2 layer height show everything is fine. I’m still not sure if it’s the low speed or fine layer height (I suspect the latter), but that’s a topic for another day. For now I have settings that I can use to print, so I’m a happy maker! 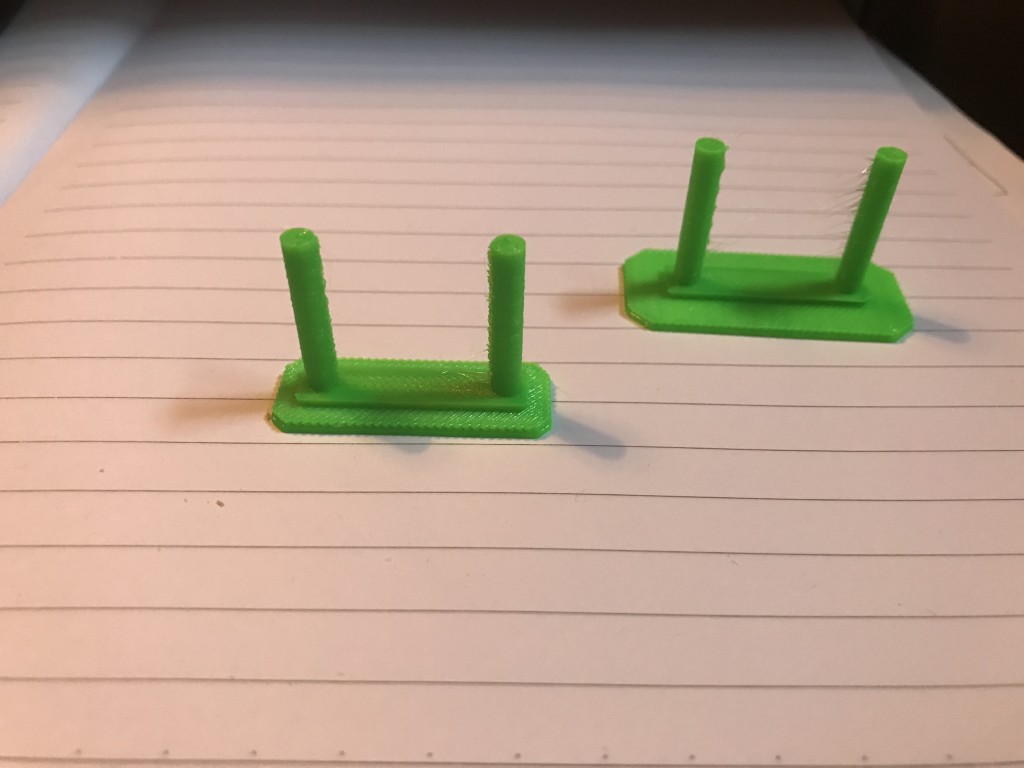 This does represent a full day of effort. Don’t listen when people say 3D printing is easy. It’s easy for the experts who know all this stuff already, but for n00bs there’s a big learning curve. When I first started this would have set me back weeks! Even now it’s lost time when all I want to do is get something printed.

A few months ago, I upgraded my printer with 2 cooling fans, one on either side of the extruder. Stock configuration had a single fan that got destroyed when an unobserved print went haywire and plastic went into the fan itself. The time was right to do the upgrade.

I can’t remember why, but I updated my firmware at the same time to Marlin 1.1.8, the latest release at the time. I’ve since updated to 1.1.9 but both had the same issues I’m about to talk about. That is thermal runaway protection. The reality is, I’d been affected by this since day one but hadn’t known. The stock fan configuration wasn’t particularly strong, and the software didn’t complain about it, but when my prints started, the fan started cooling the extruder. Close to the bed, at the start of the print, this was quite significant. So much so that the updated software complained that the heater wasn’t able to keep up once the fan turned on, and shut itself off. Every time.

The solution is to use a silicon sock to prevent this by insulating the heater block. I don’t have one. I’m still looking for one that fits.

The workaround is to scale the fans maximum speed back. Way back. It was worse with the new fan configuration, especially near the bed where the cooler air gets reflected back. Depending on the print it will also happen away from the bed. So I turned runaway detection off and babysat the fans so I could maximize print cooling without allowing the extruder temperatures to drop out of acceptable range. That’s a lot of time staring at temperature plots and entering GCode since OctoPrint has no fan control.

Enter Marlin 2.0. It’s not a release version yet although it has experienced significant development already. It will eventually include 32 bit support for a number of boards. But for me the key feature is it automatically scales back the fan speed as the extruder temperature drops. No more babysitting my prints!

How well does it work? Well, the two prints here are printed with 1.1.9 and babysitting in white, and 2.0 with automatic control in green. So yeah, I think I’m happy! 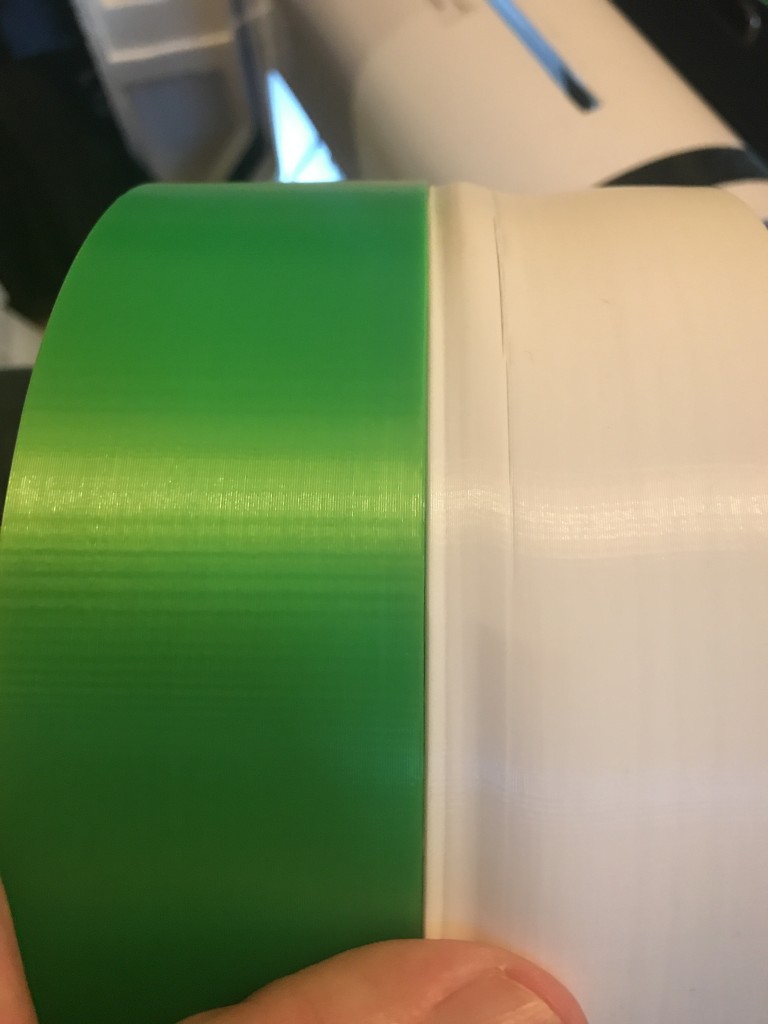 The stack is progressing! In this issue I talk about the S-IVB stage and its transition to the lower airframe. More importantly I talk about an issue with the scale for the flyable version. Don’t forget to like and subscribe!